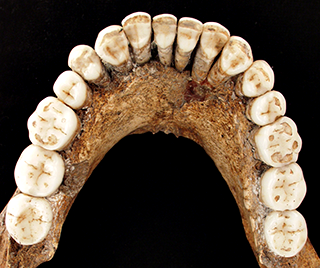 Neanderthals did not descale their teeth regularly, for which modern scientists can be very thankful. Embedded in the fossilized calculus, or tartar, on teeth from the Shanidar cave, in Iraqi Kurdistan, and elsewhere are some remarkable remains that are beginning to shed far more light on what Neanderthals ate. I don’t want to give too much away just yet. Let’s just say that if, like me, when you think of the Neanderthal diet you think of a bunch of cavemen and women sitting around chewing their way through a woolly mammoth, you’re in for a surprise.

My guide through the recent discoveries on Neanderthal diet is John Speth, Emeritus Professor of Anthropology at the University of Michigan.

Amanda Henry’s research clearly points to moist-cooked starch grains in the mouths of Neanderthals (but did they swallow?). Archaeologists, however, have found almost no evidence of Neanderthals using the hot-rocks boil-in-a-bag method of modern people who lack fire-proof containers. And surprisingly, they didn’t know what John Speth discovered while watching TV in a motel room: that it is perfectly possible to boil water in a flimsy container over a direct fire. In the interests of time I had to cut his fascinating description of an experiment to make maple syrup by boiling the sap in a birch-bark tray over an open fire, which concluded that it was “both efficient and worthwhile”. So, now that they know it can be done, how long before they discover it was done?

From a wilderness survival trick to a new theory on Neanderthal cooking.