Speaking of vanilla, … A very odd story caught my eye.

Obvious clickbait, right. I mean, vanilla came originally from Mexico, as any fule kno. The photo, of highly ordinary vanilla pods in a very modern plastic basket confirmed my suspicions. The caption:

Although long considered a product that originated in ancient Mexico, vanilla — which is extracted from beans such as these — was used by Middle Easterners around 3,600 years ago, a new study finds.

Well dodgy, but not exactly wrong. Not exactly.

My first thought was that maybe the archaeologists had fooled themselves. After all, pure vanillin is a byproduct of the degeneration of lignin. Maybe a bit of decomposing wood contaminated the juglets in which the stuff was found. But no. The truth is even more interesting, and hidden deep in Science News’ account.

For a start, the juglets also contained traces of olive oil. And while plain vanilla usually signifies the species Vanilla planifolia, there are, in fact more than 100 different species around the world. Vanessa Linares, the archaeologist who identified the compounds, refers to “the vanilla orchid” in an abstract of her research. In fact, she compared the compounds she found with those produced by other species of Vanilla, and suggests that it could have come from one of three different species.

I think, under the circumstances, I might have written “a vanilla orchid”. 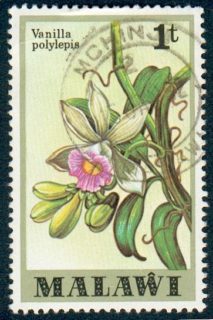 Anyway, parsimony suggests (to me) it was V. polylepis from east Africa which, although apparently showy and widespread, was not described formally until 1951. If it did travel from east Africa to the Levant, that is impressive enough. Even more so is that the people who traded it 4000 years ago knew how to undertake the painstaking fermentation that is the secret to the odour and flavour of natural vanilla. The pods barely smell, and certainly not of vanilla.

So yes, not quite what Science News was trying to sell, but pretty interesting all the same. And a project for some enterprising breeder in east Africa: Domesticate your local vanilla.

The trial and error discoveries that allowed out forebears to turn the weirdest things into pure deliciousness are a huge challenge to my worldview.