Soyer in the Crimea with several of his army stoves, and Lord Rokeby and General Pelissier 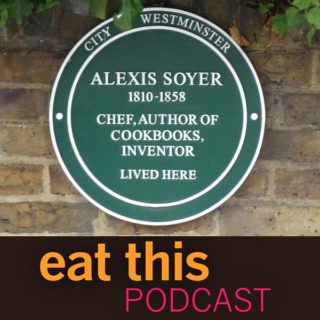 Alexis Soyer was perhaps the greatest chef of Victorian England. He designed the most modern kitchen of the 1840s and equipped it with many of his own inventions. He cooked unimaginably luxurious — and expensive — dinners for royalty and the aristocracy. He also built soup kitchens for the poor and his Famine Soup fed hundreds of thousands of destitute people in Ireland. His cookbooks sold in the hundreds of thousands, and sauces bearing his name brought luxury to the middle classes. He transformed British army cooking during the Crimean War, and the stove he invented for Crimea was still in use in the Gulf War in 1982. During the Crimean War, people said his name would live alongside Florence Nightingale’s. It didn’t, although lately Soyer, one of the first celebrity chefs, is being rediscovered.