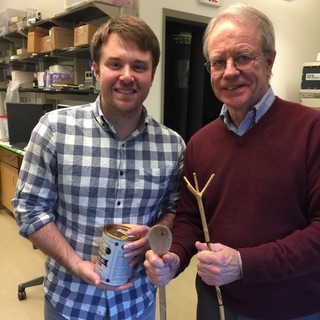 Here, for the New Year, is a confession and apology.

I was completely wrong about porridge-stirring implements and I am here to make things right.

In the episode about Porridge, I mocked the idea that the traditional Scottish spurtle, which to all intents and purposes is just a stick, might be better for stirring than a spoon. My (faulty) reasoning was that a spoon offered a greater surface area to break up lumps. In fact, as I now know, the stirrer does not break up the lumps directly.

I noted in Eat This Newsletter 110 that a friend of a friend, who is a specialist in fluid dynamics, said that he had “a working, testable hypothesis”, which required only some worthy porridge in order to test it. So, I packed a bag of my favourite oats ready to meet up at Georgetown University in Washington DC.

I should explain that Dr David A. Gagnon, the physicist in question, is the son-in-law of one of my dearest friends, who happened to be visiting when I was editing the episode. That was how David came to know of my puzzlement – and he has access to wonderful machines that can make very accurate rheological measurements. Rheology is the study of flow, and David’s idea was that the faster the stirrer moved through the porridge, the lower the viscosity of the porridge would be. Shear stress in a material like porridge would be greater at higher flow speeds, and it is the shear stress that gets rid of lumps.

You can think of shear stress as being a difference in the speed of flow of the liquid across a small distance, multiplied by its resistance to flow. That resistance to flow is what we think of as viscosity. In a viscous liquid, like honey, the stirrer produces a lot more shear stress than it would moving through water at the same speed. But there’s a crucial difference between honey and water.

To get back to porridge, and to lumps, consider a lump as the stirrer moves past it. Relatively speaking, the part of the lump in the slower flow near the edge of the stirrer is being held fast, while the part in the faster flow is being pulled away, and that’s what destroys the lump, pulling it apart.

The rheometer measures all that. It has two circular plates, one above the other, and the bottom plate can be rotated very accurately through a known distance at a known speed. David carefully loaded a little bit of porridge onto the bottom plate and then lowered the top plate to make contact with the porridge. The layer of porridge mechanically connects the bottom plate to the top plate, which in turn is connected to sensors that accurately measure how fast and how far it rotates. Meanwhile, David had programmed the machine to oscillate the bottom plate over a wide range of frequencies. The faster the oscillation, the greater the stress on the porridge. The machine then takes all those measurements and creates a set of graphs that describe the rheological properties of the porridge. 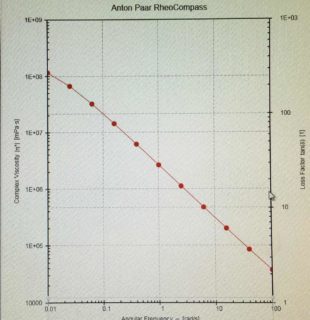 The viscosity graph, photographed directly from the screen.

The graph appeared and I confess it was really exciting to watch the points appear. A straight line down from top left to bottom right over a huge range of stirring speeds. As David had suspected, the viscosity declines linearly with the speed of rotation.

Like good experimentalists, we turned to a nearby, very heavily used whiteboard to try and get a grip on what was happening.

David drew a circle, a cross section through the spurtle, and an elongated ellipse, a cross section through a spoon, and flow lines as they moved through the porridge. For any given speed of movement, the energy needed to move the spurtle would be lower than the energy needed to move the spoon. Likewise, for any given amount of energy, the spurtle would move faster than the spoon. Shear stress depends on speed of movement. So, with a spurtle, it takes less energy to get a certain amount of shear stress and thus a certain amount of lump-disruption.

But there’s more. Because the viscosity of porridge goes down as you stir faster, the rapidly-moving spurtle is even better at breaking up lumps than the slower-moving spoon.

And that is why a spurtle is better for stirring porridge. It’s more efficient. 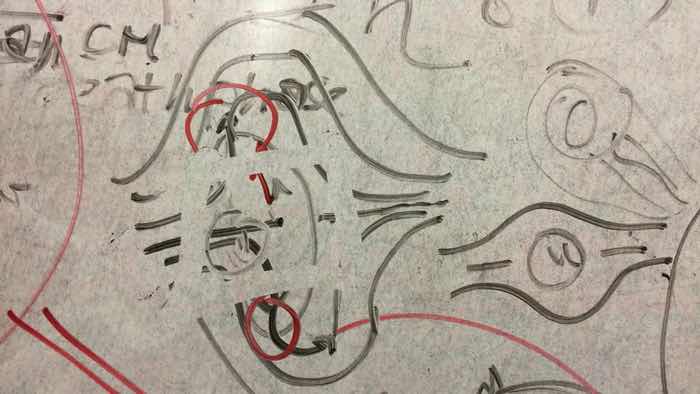 David’s diagram on the whiteboard, with my crude attempt to turn a spoon into a spurtle

Conceptually, my real breakthrough moment came as David was drawing the flow lines. There is a dead area, just in front of the spurtle and the spoon, where the porridge is not flowing past the stirrer. The dead area impedes the forward movement of the stirrer, and is considerably bigger for the spoon. However, if you remove the large blade of the spoon, you’re left with a spurtle.

And a cleaned up version of the whiteboard diagram

My overall conclusion: if you have a spurtle, use it. If you don’t, don’t worry about it too much.

Huge thanks to David Gagnon and Robert Seyfarth for making this bit of experimental fun possible. And of course, any errors in this account are mine and mine alone.

With a bag of porridge oats in my baggage, I set off for Georgetown University and a date with science