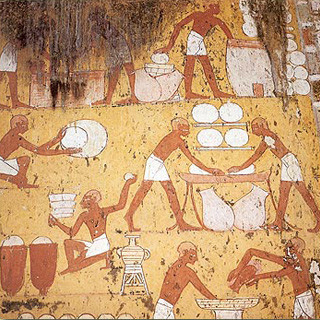 Say you wanted to bake bread in a microwave – I can’t think why, but say you did – you could go online and search the internets for a recipe. And you would come up with a few. Just reading them over, they didn’t seem all that appetising. One, for example, warned that you had to serve the bread toasted. What’s the point of that? Anyway, that didn’t deter Ken Albala, a professor at the University of the Pacific in Stockton, California, but rather than search the internet, he turned to ancient Egypt for inspiration. In thinking about ways in which the material culture of food might change in the future, for the Oxford Symposium on Food and Cookery, he came up with not only the plate that keeps crispy things crunchy, but also a way to bake bread in a microwave. Not great bread, but acceptable bread.

Why? Well, partly because it is hot where Ken lives, and he doesn’t like putting the oven on just to bake bread. And partly because he foresees a future in which space is at a premium, cooking, maybe, is deskilled, and ovens, where they exist, are used for storing stuff, not baking.

Turns out, though, that there’s method to Ken’s madness. I’d always thought that microwaves heat water molecules and that’s that. Apparently not, as I learned from Len Fisher at Bristol University. Apparently some ceramics absorb microwaves and others don’t, and if you have a ceramic that absorbs microwaves, watch out. It can get very hot. Hot enough to turn bread dough to toast in less than 7 minutes.

Len admitted that he didn’t fully understand the physics of different ceramics in the microwave, which means there’s no chance for me and you. But he did think he’d invented something along the lines of Ken’s bread mould. Turns out someone had already patented it, although as far as I can tell the patent has lapsed and nobody ever did anything with it. Or did they? If you’re aware of a container designed to bake bread in the microwave, please leave a comment.