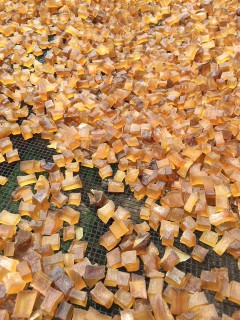 If you listened to my most recent podcast you have heard me declare Indonesia the global leader in foods that crunch. I was particularly struck by a large square of tasty nothingness, an airy pillow about 10 cm square and 2 cm thick that was somehow vaguely familiar and yet utterly strange. I even guessed that it might have been made somehow from the starchy water left after washing rice.

Today I learned the truth, and I could not have been more wrong. The cracker in question is the bovine equivalent of porky scratchings, and as someone who, in his youth, had consumed a scratching or two, knowing that explains the vague familiarity.

Today I met Ibu Tima and her son Nico, who make smaller versions – 2 cm cubes – of these things 1 for a living. The process starts with the skin of a water buffalo, bought from the local butcher. That gets cut up into pieces and boiled (exact details are a little hazy) and then the hair and outer layer of skin are scraped off. The pieces are then boiled again before being cut into cubes of about 1/3 cm and placed out on a mesh frame under the sun. Tima or Nico stir them about every now and again, and after two days the skin cubes resemble light yellow amber.

Transformation into crackers starts with soaking the cubes in warm oil. They’re not really frying at this stage, just being warmed up a bit, although they do expand a bit too. Then comes the drama of chucking the warm cubes into really hot oil, where they hiss and spit and bubble and expand like that crazy foam insulation you squirt into big gaps around windows.

And that’s it, after a minute or two draining: cubes of tasty, crunchy nothingness.

I was suitably amazed, and of course I had to share my learnings. ‘Cos that’s what we do when we’re on mission.

Today I learned the secret of the strange giant crackers that rescued my chicken sate from being way too goopy.