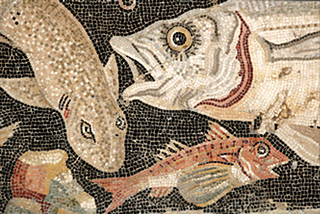 Garum is one of those ancient foods that everyone seems to have heard of. It is usually described as “fermented fish guts,” or something equally unappealing, and people often call it the Roman ketchup, because they used it so liberally on so many things. Fermented fish guts is indeed accurate, though calculated to distance ourselves from it. And garum is just one form of fermented fish; there’s also liquamen, muria. allec and haimation. All this I learned from Laura Kelley, author of The Silk Road Gourmet. Unlike most of the people who opine on garum, and who offer recipes for quick garum, she painstakingly created the real deal. She is also convinced that it isn’t really Roman in origin. We only think of it that way because history is written by the victors not the vanquished.

And then there’s the whole question of the Asian fish sauces, Vietnamese nước mắm and the rest of them. Independent discovery, or copied from the Romans?