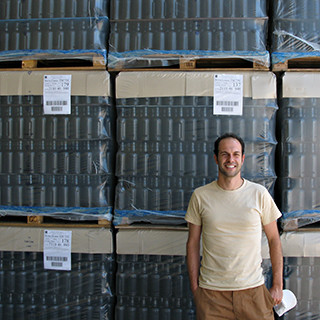 Italy, land of fabled wines, has seen an astonishing craft beer renaissance. Or perhaps naissance would be more accurate, as Italy has never had that great a reputation for beers. Starting in the early 1990s, with Teo Musso at Le Baladin, there are now more than 500 craft breweries in operation up and down the peninsula. Specialist beer shops are popping up like mushrooms all over Rome, and probably elsewhere, and even our local supermarket carries quite a range of unusual beers. Among them four absolutely scrummy offerings from Mastri Birai Umbri – Master Brewers of Umbria. And then it turns out that my friend Dan Etherington, who blogs (mostly) at Bread, cakes and ale, knows the Head Brewer, Michele Sensidoni. A couple of emails later and there we were, ready for Michele to give us a guided tour of the brewery.

Mastri Birai Umbri is owned by the Farchioni family, which has become a powerhouse in basic agricultural products since the late 18th century. Farchioni olive oil is ubiquitous, and their flour only slightly less so, and while the quality of these products is high, they’re not the sorts of commodities I associate with a craft brewery. But I am starting to rethink the casual opposition between “industrial” and “craft” or “artisanal”. It’s true that industrial food processes are often soulless, repetitive and designed to serve only the bottom line, degrading the notion of quality about as far as it will go before people revolt. But my conversation with Michele showed me that it is possible to take an industrial approach to the production of a high-quality product. He insists on repeatability – that the brew should taste the same each batch and present the drinker with the same experience each time. That is probably the major distinction from a more artisanal or craft approach that instead of stomping out all the differences uses a different kind of skill to allow the product to vary slightly from batch to batch. The quality of Michele’s beer, however, is unimpeachable.

The other big distinction, I suppose, is quantity. When I asked him what the future might hold for craft beers in Italy, Michele thought it unlikely that 500 breweries could survive, because many are too small to compete. But why should that matter? If you’re big enough to survive at some scale, perhaps only in a local market, do you have to keep growing. This is one of those eternal business mysteries that I’ve seldom heard explained to my satisfaction. Why is perpetual growth necessary? Of course, demand may increase. But if you’re making as much as you want to and need to, and don’t want to regulate demand by increasing the price, that’s an opportunity for someone else to enter the market. You don’t have to do it yourself.

All of which is probably a bit deep for a consideration of well-made beers. In any case, I think I need to stop using “industrial” as a term of opprobrium and focus instead on the product, rather than the means of production.

What matters is not how little beer you make, but how carefully you make your beer.