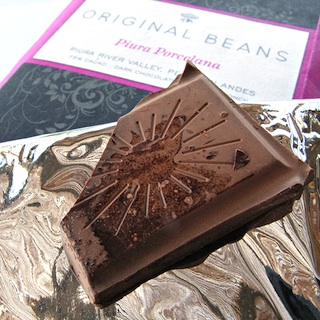 The world of fine chocolate has seen some major change in the past few years, much of it focused on the rise of so-called “bean to bar” chocolate made by smallish producers with an eye on the distinctive qualities of different cacao beans. One company that’s been making a name for itself is Original Beans, which markets a package that tells “The story of cacao in four bars” that recently won a silver medal for packaging at the Academy of Chocolate awards in London. Last summer, I was lucky enough to sit down with Sudi Pigott, a consultant to Original Beans, and taste a couple of them.

I came away from the interview with half a bar of one we didn’t taste, the Piura Porcelana. Typing the ID code into the Original Beans website took me lickety split to a page all about that chocolate. It’s an intriguing story, the Porcelana variety being characterised by beans that are a lot lighter in colour than most cacao. Porcelana, of which there are said to be 33 genetically different types, was apparently rediscovered by Original Beans in 2007, since when the company has been working with local farmers and NGOs to boost production. But there are some niggles too. It’s strange, for example, to be told:

Original Beans is good chocolate, no doubt about that, although there’s also been a bit of a to-do in the rarefied world of chocosnobs about who exactly makes Original Beans’ chocolate. The packaging says Made in Switzerland, although the company is headquartered in Amsterdam. CEO and founder Phillip Kauffmann is quite open about it being made by Felchlin, at least when asked, but that information is not widely available. Is that a problem? Not to me. There are people who make chocolate, and people who make things from chocolate, and they’re often not the same people. Apparently at the fine end of the “beans to bar” world that matters. Original Beans does everything except make the bars; I think that’s acceptable.

Is the price equally acceptable? I don’t know; what should good chocolate cost? Fair prices for farmers, men and women alike, no child labour, environmental sustainability, conservation, all that … what’s it worth?

I’m not the first to ask the question What Is The True Cost of Chocolate? of Original Beans, and the answers given then, in 2009, certainly have a lot of feelgood about them. In truth, though, I don’t think we’re any nearer an answer, and we won’t be until we have independent audits and much more transparency than most businesses could survive. There’s a real dilemma here. Original Beans and many other topnotch chocolate makers can charge what they do in large part because they are making smaller batches. They’re competing with one another, not with the industrial giants. Industrial chocolate really is a rather ghastly business in all sorts of ways, and yet I don’t see the vast majority of its customers switching to more ethical products, and if they did, I don’t see the ethics surviving the onslaught.