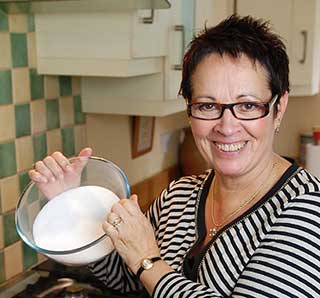 Vivien Lloyd about to add warm sugar to her simmered fruit.

What is jam? “A preserve made from whole fruit boiled to a pulp with sugar.” Lots of opportunities to quibble with that, most especially, if you’re planning to sell the stuff in the UK and label it “jam,” the precise amount of sugar. More than 60% and you’re fine calling it jam. Less than 50% and you need to call it reduced-sugar jam. Lower still, and it becomes a fruit spread. All that is about to change though, thanks to a UK Goverment regulation that will allow products with less than 60% sugar to be labelled jam.

There’s nothing like a threat to the traditional British way of life to motivate the masses, although as an expat, I had no idea of the kerfuffle this had raised until I read about it on the website of the Campaign for Real Farming.

Changing the rules for what is labelled jam may seem like a tempest on a teacake, but it is symptomatic of the growing distance between what were once simple methods of food processing – in this case to preserve it – and the industrial version of a similar product. And making jam at home isn’t that hard.

There is, though, the problem of getting it to set properly. I had a little read to remind myself of what Vivien Lloyd called the magic of pectin, and it isn’t simple. Pectin is a long string of a molecule, present in the glue that cements cell walls together. Some fruits have loads of it, others less. The long strings bind together and form a mesh that traps any liquid inside the spaces between the pectin molecules, but they bind together only under specialised conditions. Acid reduces the tendency for pectin molecules to repel one another, while sugar attracts water, and so allows the pectin molecules to come together. And fruits supply acid and and sugar. “Sounds like a cinch,” says Harold McGee …

“But as anyone who has tried knows, it’s anything but a cinch. Making preserves is a tricky business because the necessary balance between pectin, acid, and sugar is a very delicate one. Food scientists have found that a pH between 2.8 and 3.4, a pectin concentration of 0.5 to 1.0%, and a sugar concentration of 60 to 65% are generally optimal, but you would have to be cooking in a well-equipped laboratory to measure the first two condition (sugar content is easily measure by boiling point).”

That’s one reason I asked Vivien Lloyd to share her recipe for raspberry jam, which she kindly did. Download the recipe for Raspberry and Vanilla Jam.