Tomorrow’s newsletter links to a lovely long piece in the New York Times Magazine about the Bread Lab at Washington State University. Behind much of the research is the worry that modern wheats are less nutritious than their parents. There’s good evidence for that, and I recently came across a new study that enlarges the scope of that worry to all the main staples. 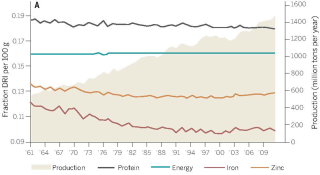 The graph may seem a bit complex, but stick with it (and click to enlarge). It shows the percent of the daily recommended intake of four important nutrients provided by 100 gm of a basket of 8 cereals, adjusted so that the amount of each in the basket each year is based on how much the world produced that year, from 1961 to 2011. Energy has stayed the same. Protein, zinc and iron have dropped.

Staple crops are less nutritious than they were.

The graph is from Metrics for land-scarce agriculture, by Ruth DeFries and her colleagues, in the 17 July 2015 issue of Science. It offers a fascinating look at the future of agriculture and food, and I hope to have the authors on the show some time soon.

A little bit of science, on how modern plant breeding has changed the nutrition of staple crops.