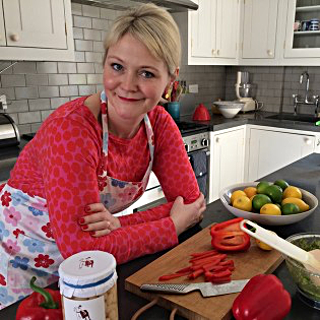 By great good fortune, there is nothing I cannot eat. There are a couple of things I’d prefer not to eat, but nothing, at least as far as I know, that would make me ill. As a result, I am fascinated by people who have to forego certain foods to stay well. I used to follow someone on the web who swore that something called the Specific Carbohydrate Diet™– which, I learn, apparently requires initial caps and a TM symbol — was the only thing that kept her alive. I never really investigated further, because that was before I had a podcast to feed and she more or less stopped writing about it. So when the chance arose to talk to someone who is living with the disease and the diet, I leaped at it.

Victoria Young is a journalist who has been following the SCD™ for about seven years. She says that it has actually renewed her relationship with food, partly by making her think hard about what she eats. Far from being a dull diet that is all about avoiding things, it forces her to be inventive with the things she can eat. And she says she’s never felt better. The medical establishment may not be too keen on the SCD™ but the proof of the pudding — assuming you can in fact make a pudding that complies — does seem to be in the eating.