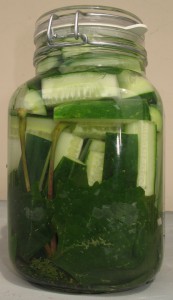 Apologies for the delay in publishing this podcast. One of the joys of not being tied to “proper” radio is the freedom to give a story the length it deserves. The downside is that nobody is cracking the whip to whip things into shape on time, so that sometimes, even with the best will in the world, the schedule slips. Maybe if this were my day job …

Bread, yoghurt, pickles: I do love my domestic microbiology. So does Ken Albala, of the University of the Pacific in Stockton, California. His enthusiasm outstrips mine, though, not least because he probably has more space for his experiments. One manifestation of that enthusiasm is a Facebook group dedicated to The Cult of Pre-Pasteurian Preservation and Food Preparation. For Ken, sterilising fermented food is a no-no. Who better, then, to explain how it is that “pickled” has come to mean “boiled in vinegar” rather than “naturally fermented”.

Of course, the whole business of home fermentation has reached fever pitch, manifested by the pickle trend being the number one sketch on a trendy comedy series. Let us not, however, throw the baby out with the brinewater. It really is remarkably easy, and if you want to start, there are endless reams of advice on the internet. Just ignore anything that suggests you boil the proceeds. Emboldened by Ken, I do plan to try sausages some time in the New Year.