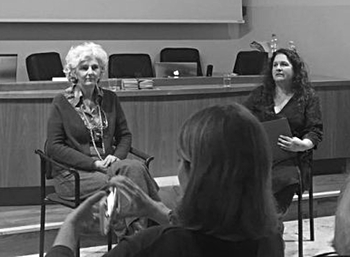 Last night I was lucky enough to go to a conversation between Fabrizia Lanza and Evan Kleiman. Fabrizia is taking over from her mother’s world-famous cooking school in Sicily, most notably with an amazing programme called Cook the Farm. And Evan, among her many other achievements, hosts a show called Good Food on KCRW. They were talking about Food and Agriculture in Italy.

The discussion was very interesting, thoughtful and thought-provoking, and here’s the main thought it provoked in me?

Where’s the romance in milking 300 sheep by hand, twice a day?

Fabrizia made much of her local shepherd, who indeed milks 300 sheep by hand each morning, makes cheese, takes the sheep out to pasture, where they spend six hours or so whatever the weather, brings them back, milks them again, makes another batch of cheese and does it all over again tomorrow.

And he has to milk them by hand, because “how else will he know whether they are happy?”

The whole shepherd thing was connected to determining a fair price for food and embedded in a much wider discussion of sustainability. Then, a little later in the conversation, Fabrizia Lanza talked about the idea of creating “a good Monsanto”. She fully recognizes the need for a food industry alongside the romantic, the artisanal and the authentic, but an industry that has values other than pure profit.

So why shouldn’t her shepherd use milking machines? The use of a milking machine does not in and of itself mean that the practice is in any way inhumane or bad for the animals. You can choose whether to rush, treating the sheep as no more than milk-producing machines. Or you can choose to take things a little more slowly, assuring yourself that each ewe is as happy as can be. The milking machine is not the problem; the way it is used may be.

Maybe the shepherd can’t afford such a thing, probably he wouldn’t want to get into debt. My point is only that he doesn’t have to milk by hand to produce an extremely fine product. If the community truly wanted to support him, they could help him to milk by machine. Maybe he could repay a loan with that fine cheese.

This is all part of a much larger problem, which is what Fabrizia was alluding to when she spoke of good industrial food. In many cases, as Rachel Laudan has pointed out on the podcast, Industrial is best. She spoke about salt and sugar, but there are other examples too, including the gentler pressing of grapes that some people say makes more delicious wines, and a high-tech brewery turning out very fine beer. Indeed, Fabrizia Lanza acknowledged that much of the olive oil in Sicily used to be rancid, and now it isn’t. She didn’t say whether this might at least partially be the result of modern pressing equipment. I suspect it is.

And that’s the point, for me. No industrial machinery automatically results in an inferior product. It is the entire system in which it is embedded and used that determines the quality of the food we eat.

Where’s the romance in milking 300 sheep by hand, twice a day?