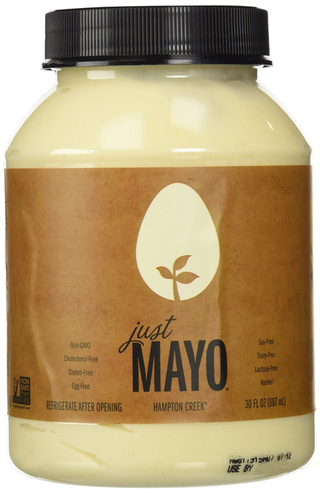 It’s hard to know what this episode is really about. Government bullying private enterprise? An evil conspiracy to crush a competitor? Confused consumers unable to read a label? All of the above? In a nutshell, on 12 August 2015 the US Food and Drug Administration sent a warning letter to Josh Tetrick, CEO of Hampton Creek Foods, informing him that two of Hampton Creek’s products:

Just Mayo and Just Mayo Sriracha are the two products, and their crime is that they do not contain eggs. So they cannot be called “mayo”. Who sicced the FDA on Hampton Creek? has become the big question, as a pile of emails winkled out of the government by a Freedom of Information Act request seem to show that the American Egg Board orchestrated a campaign against Hampton Creek.

I mentioned the story in my newsletter three weeks ago, which prompted Peter Hertzmann, an independent researcher and a friend, to suggest that the reality, as ever, is not quite so straightforward. Peter was good enough to fill me in on some of the background.