You may be wondering, if you care about these things as I do, why there is a chilli species called Capsicum chinense.

The chilli didn’t reach China until the 1570s or thereabouts, and capsicums in the wild are restricted to the Americas, yet C. chinense is a perfectly valid species name. Indeed, many of the hottest peppers in the world have the distinction of belonging to that species, which also includes the more familiar Habanero and Scotch Bonnet varieties. 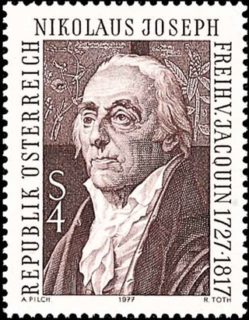 Start searching, and you learn that the species was described and named by Nikolaus Joseph von Jacquin in 1776. He was a Dutch scientist who ended up working for the Austrian crown and undertook an impressive early collecting trip in the Caribbean. Von Jacquin’s family was highly regarded in Vienna, where Mozart taught his daughter piano and wrote songs for his son. He was also one of the earliest promoters of the Linnean system of binomial nomenclature, and enjoyed a long friendship and correspondence with Linnaeus.

A most difficult taxonomic morass

There are five domesticated species of Capsicum (and some hybrids) and three of them — C. annuum (by far the most common), C. frutescens (Tabasco, and not a lot else) and C. chinense — are not easy to tell apart. Most descriptions focus on the number of flowers that grow from the base of each leaf, 2–5 in chinense as opposed to only a single flower in annuum. The three interbreed to varying extents and back in 1993 one expert said their classification “has been and continues to be a most difficult taxonomic morass”.[1] Modern molecular methods back that up; the three arise from a single ancestor and are one another’s closest relatives. 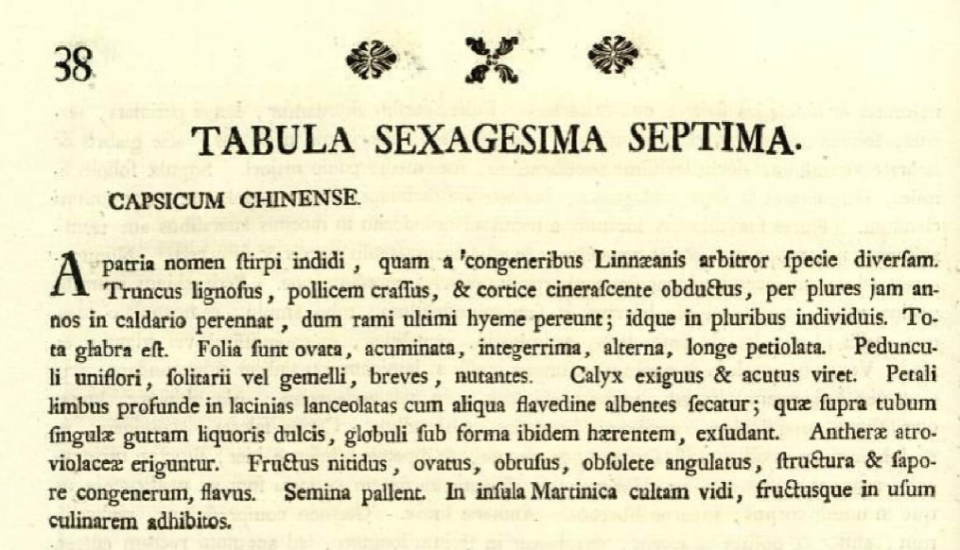 Von Jacquin’s description[2] does not say why he thought it was from China. It does say, roughly, “I saw [them] cultivated on the island of Martinique, and seeds used in cooking.” 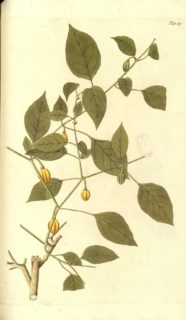 Von Jacquin seems to have described a cultivated variety growing the gardens of Schönbrunn Palace outside Vienna. Almost 200 years later, the species was identified in the wild

Paul Smith and Charles B. Heiser Jr did an exhaustive study of wild and weedy capsicums from all over, in the course of which they found that some plants from Central and South America did not fit into any of the species they had previously recognised.[3] Though it apparently piqued them to admit it, these plants clearly belonged to what they called Capsicum sinense.

Smith and Heiser offered an “emended” description that places special emphasis on the 3–5 flowers at each node and a marked constriction at the base of the calyx. They then say:

It is unfortunate that the earliest name for this American plant appears to be Jacques’ [sic] C. sinense (as “chinense”). The plant shown in his plate, although showing only two pedicels at the nodes is almost identical to some of our collections. Our Ac. 751 (P.I. 157,062) from Lanchow, China, is a fairly close match and it in turn is almost indistinguishable from a line (Ac. 910) from Costa Rica.

I see only one pedicel at the nodes in von Jacquin’s plate, above. Maybe Smith and Heiser were looking at a different one. In any case, I quite like the fact that von Jacquin, who worked to promote Linnean binomials, gets the last laugh because he got the first name. Did the plants he described come from China? He must have thought so.

Wikipedia’s view is that von Jacquin "believed they originated in China due to their prevalence in Chinese cuisine after their introduction by European explorers,”[4] and it cites a chapter by Paul Bosland in support. Chastened by the whole spinach thing, I checked.

Bosland says “the French taxonomist who named this species in 1776 got his seed from China”. Leave aside that von Jacquin was born in The Netherlands and working in Austria at the time; what is Bosland’s source? None other than Smith and Heiser (1957).

And they say absolutely nothing about the source of von Jacquin’s seeds.

The mystery, then, abides. Maybe someone with access to the archives at Schönbrunn Palace or the University of Vienna botanical gardens could take a quick poke around and see if there is any indication of the geographical origin of the plants that von Jacquin named Capsicum chinense.