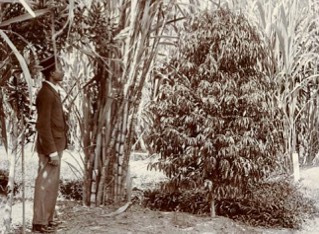 I’ll be honest, I thought I was pretty savvy about coffee taxonomy knowing that there were two kinds, arabica and robusta. Not surprisingly, perhaps, a research paper about “Coffea stenophylla and C. affinis, the Forgotten Coffee Crop Species of West Africa” caught my attention. And of course, as I should have known, there are scores of different coffee species. What is particularly intriguing about C. stenophylla, however, is that in its day people considered it a very fine coffee indeed. A 1925 monograph recorded that “The beans are said, by both the natives and the French merchants, to be superior to those of all other species.”

So what happened to it? And what are the chances of a revival? Jeremy Haggar, of Greenwich University, told me.

In Sierra Leone, a hunt for long lost species of coffee succeeds