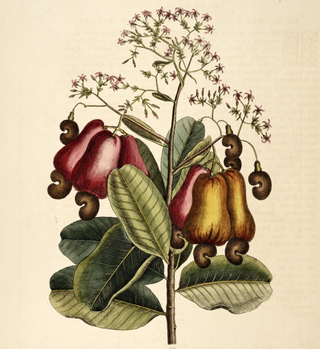 In the wake of the previous episode on how capuchin monkeys find their food, I learned that many people were unaware just how difficult and dangerous it is to get cashew nuts. Not for us, of course; you just buy a little bag of them. For the people who process the nuts to fill those bags, however, it is a very different story. Permanently damaged fingers, burned by the acid that protects the cashew, are an occupational hazard for the hundreds of thousands of women who extract the kernels. Mozambique was once the world’s top producer of cashew nuts, and the women who worked there enjoyed better than average conditions. In the aftermath of the civil war there, however, the World Bank stepped in with a rescue package and a cashew nut policy that destroyed the industry. 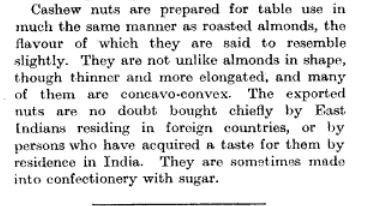 The history of the cashew in the West is relatively recent. A 1917 report on the Indian Cashew-Nut Industry from the Royal Society of Arts says sniffily that the cashew apple “is eaten only by the lowest classes, and quantities of it are wasted”. At that time, total exports from India amounted to about 680 metric tons. The report explains:

Cashew nuts are prepared for table use in much the same manner as roasted almonds, the flavour of which they are said to resemble slightly. They are not unlike almonds in shape, though thinner and more elongated, and many of them are concavo-convex. The exported nuts are no doubt bought chiefly by East Indians residing in foreign countries, or by persons who have acquired a taste for them by residence in India. They are sometimes made into confectionary with sugar.

It isn’t often that the dangers of badly prepared cashews come to light for those of us who view them as a snack rather than work with them directly. The best example I have found dates to April 1982. A Little League organisation in Southcentral Pennsyvania bought almost 3000 bags of cashews to sell as a fund-raiser. Fifty-four people who ate the cashews developed an itchy dermatitis very like a poison ivy rash. Only three of them suffered blisters in the mouth. Most (97%) had the dermatitis on their extremities, while 66% had the rash on their trunk, 45% in the groin, 34% in the armpits and 21% on the buttocks. An unfortunate “four persons reported perianal itching”. All of which raises, for me, the question of how exactly the cashews provoked the reaction. Aside from the mouth and the extremities, and possibly the perianal itching, where it could clearly be as a result of contact, could the irritant have spread internally? Or was it, as I believe happens with poison ivy, the result of scratching the rash in one place and then touching the skin elsewhere? Unfortunately, the report from the Centers for Disease Control does not say. Investigators did examine 14 unsold bags of cashews. Five of them contained pieces of cashew shell. I’m guessing nobody ate cashew shell by accident, so I can only imagine that the acid from the shell rubbed off onto the nuts and from there onto the skin. The nuts, alas, had been imported from Mozambique.

Mozambique used to be the world's largest supplier of cashew nuts. Then along came the World Bank, to help.