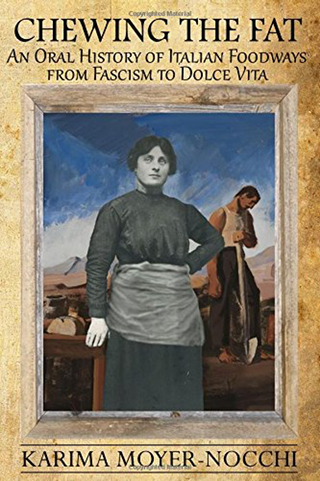 Karima Moyer-Nocchi is an American woman who teaches at the University of Siena. When she had been here almost 25 years she developed something of an obsession. On the one hand, she watched “a bewildering decline in the quality and craftsmanship of Italian food together with a skyrocketing deification of it”. On the other, “in a vicious circle, the decline stimulated the explosion of the gastronomic nostaliga industry, which in turn, hastened the very process it claimed to quell”.

This is not something you would notice. The modern idea is that Italian cuisine has always been more-or-less what it is, and that if there were a difference between social classes, it was more about how often they ate certain dishes, or the quality of the ingredients, than about what they actually ate. As Karima Moyer-Nocchi discovered, that rose-tinted view is at odds with what actually went on.

In an attempt to make sense of the changes, Moyer-Nocchi turned to women, now aged 90 and more, who had grown up under fascism and who, perhaps, could shed light on the recent history of Italian food. She gently coaxed their memories of food from them, and created a book that is part oral history, part academic history, and that puts the current mania for Italian cuisine in perspective. There’s no way we could cover it all in one interview, but I think you can get some idea of how things have changed, mostly for the better, and also how little one knows about the real history of food in Italy.