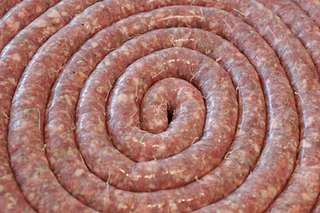 English sausages have a definite dual personality. One of those is a sumptuous, succulent blend of good meat, a bit of cereal, herbs and spices and maybe even a touch of the vegetable, like leeks. The other is a staple of the poor. Who knows what unspeakable things lurk inside its wrinkled exterior? But if, like me, you thought that the suspect sausage was purely a product of the industrial revolution, prepare for a revelation.

Jan Davison was the second ever guest on the show, talking about the air-cured sausages of Europe’s mountainous regions. Her new book is all about the English sausage, and digs deep into its Jekyll and Hyde past, served at the court of Richard II and hiding tainted meat and worse from the sight of the urban poor.

Who knows what evil lurks beneath the wrinkled skin of an "economy" English sausage? And what delights won for the Cumberland and the Newmarket their coveted status of Protected Geographical Indication? Jan Davison, that's who. She wrote the book on English sausages and is the guest in this latest episode.