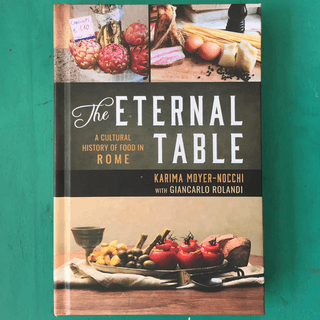 According to Virgil, Rome owes its existence to a food-based prophesy that persuaded Aeneas that this was indeed the place for the weary Trojans to make a new home. And according to the proprietors of both of the restaurants that claim to serve the original, authentic fettucine Alfredo, Alfredo himself invented the dish in the 1920s.

In her new book, Karima Moyer-Nocchi examines The Eternal Table from Aeneas to Alfredo, and about all one can conclude is that from the very beginning Rome, like everywhere else, has been subject to waves of fashion, innovation and conservatism.

Pasta Alfredo offers a perfect example. The cutlery in the banner photograph and those in this image illustrate the unreal history of the dish. One contains the original inscription, one does not. One is original, one is not. Which is which?

Alfredo sauce, made famous in the 1920s, dates back to at least 1390. That, and other surprises of food in the Eternal City.