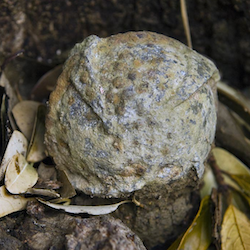 A bombie cluster munition on a farm in Khammouane Province, Laos.
©2010/Jerry Redfern

Karen Coates is a freelance American journalist who writes about food – among other things. She emailed to ask if I would be interested in talking to her about a book that she and her husband, photographer Jerry Redfern, have produced. It’s called Eternal Harvest, but it isn’t about food, at least not directly. Its subtitle is the legacy of American bombs in Laos. Some of those bombs are 500-pounders. Lots of them are little tennis-ball sized bomblets, which are as attractive to farm kids as a tennis ball might be, with horrific consequences. The story of unexploded ordnance in Laos was an eye opener, for me. But I also wanted to know about food in Laos, and so that’s where we began our conversation.

Over the course of nine years and a bombing mission every eight minutes, round the clock, more than 270 million cluster bombs – or bombies – were dropped on Laos. The cluster bombs were a small part of the 2 million tonnes dropped on Laos, almost half a tonne of ordnance for every man, woman and child in the country. Some was aimed at breaking the Ho Chi Minh Trail. The rest was jettisoned by pilots who had been told not to return to base with any bombs left in their planes. The failure rate, as Karen said, was around 30 percent. Unexploded ordnance remains an ever-present threat, and not only during the business of farming. About half the people killed, according a a 2009 report, were going after scrap metal. A scrap metal collector can make $5 a day, compared to the average wage of about $1 a day. And that’s not the only way the bombs are “beneficial”. Many farming families use craters – created by bombs that did explode – as fish ponds, improving both their income and their nutritional status. 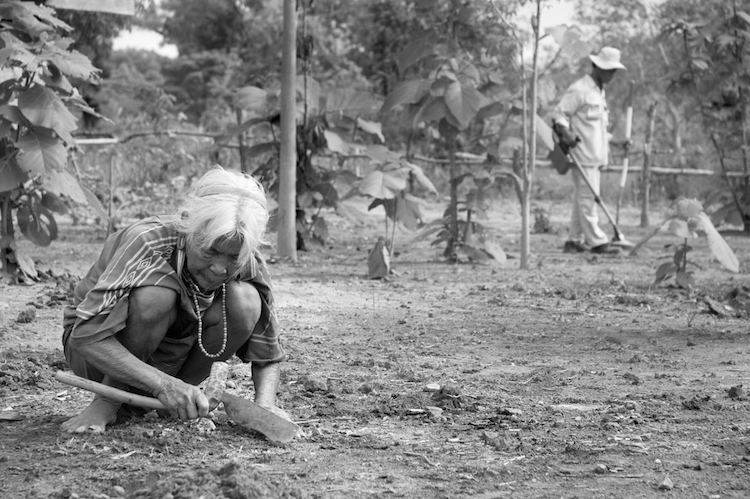 A technician with a UXO Lao bomb disposal team scans for bombs in a woman’s yard as she continues weeding. They work along a new road built atop the old Ho Chi Minh Trail.
©2006/Jerry Redfern