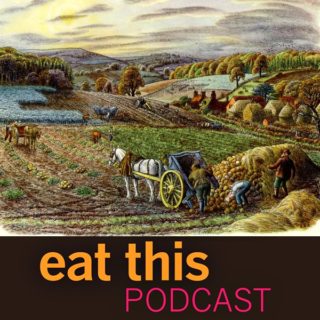 Colin Tudge has been writing about food and farming for a long time in a series of thought-provoking books. His latest is The Great Re-Think, which examines the current state of the world and sets out the steps needed to get to where he (and many other people) think we ought to be. They include skill and craft over automation, complexity over simplicity, and diversity over monoculture. The start, though, is to really think about what it is that we want our food system to provide.

A word about the pictures. They are from a Puffin book for children, Farm Crops in Britain, and are undeniably bucolic, rustic, from a bygone age. But that was only 65 years ago. The book was written by Sir George Stapledon, one of the great agricultural scientists of the early 20th century, who wrote at length about many of the same things that we talked about in this episode. I should do one on him.

Skill and craft over automation, complexity over simplicity, and diversity over monoculture