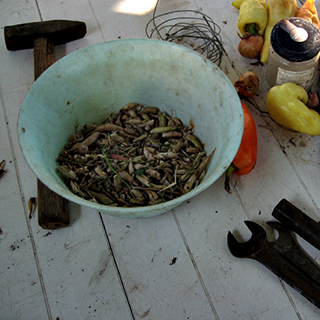 Introducing a blog post with the words “The European Commisssion recently decided …” is possibly a guaranteed turn-off, unless the decision concerns something really important like straight cucumbers. Illegal seeds, though, that might just stir some interest. And so it was, three weeks ago, with a proposal for a new draft of the laws that govern the marketing of plant reproductive material – seeds, among other things – in the European Union. I wrote about this over at the other place, but I also thought it would be worth doing something here, because for much of the food we eat, everything starts with the seed. You can’t have a really sustainable, locally-adapted and diverse diet if you can’t have a diversity of seeds. Bottom line: the new EU proposal is an improvement, and is not nearly as bad as some people seem to think, but it could be better still.

Not everybody is as interested in the arcana of seed law as I am, so I may have taken too much for granted in the podcast. There’s more information at a couple of the links below, which would be a good place to start if you want to explore further.

The big question is, why do amateur growers and those who choose not to care even need the protection of EU seed legislation?