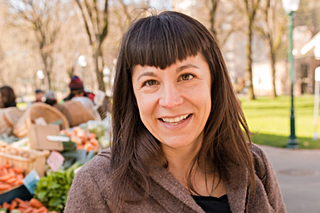 Many vegetables don’t taste of anything much these days, but whose fault is that, really? Plant breeders produce what growers want, and growers want what people will buy. So why aren’t people buying flavour? Mostly because they aren’t being offered a real choice. Lane Selman, who works on organic projects at Oregon State University, discovered that although organic growers say they want disease resistance, for example, they don’t actually grow existing disease-resistant varieties “because they taste terrible”. Lane enlisted a handful of chefs to taste some peppers that a local breeder was working with. From that quiet beginning has blossomed the Culinary Breeding Network, which aims to “bridge the gap between breeders and eaters to improve agricultural and culinary quality”.

For the past three years, Lane has organised a variety showcase that pairs chefs with breeders and growers to display their combined talents, creating interesting vegetable varieties and interesting dishes from those varieties. We talked about how the Culinary Breeding Network began and about the latest variety showcase.

If you going to breed vegetables for flavour -- perish the thought -- you need someone to help you decide what's good. Enter the Culinary Breeding Network.