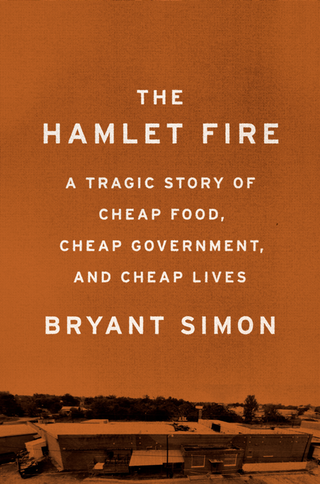 Industrial accidents, tragic though they may be, can also lead to change. The fire at the Triangle Shirtwaist Factory in New York in 1911 is credited with changing a generation’s attitudes to worker safety, unions and regulation. Eighty years later, another industrial fire also killed workers because, like the Triangle fire, the doors were chained shut from the outside. That fire, at the Imperial Food Products plant in Hamlet, North Carolina, changed almost nothing.

In his new book The Hamlet Fire, historian Bryant Simon uses the fire to tell what he calls A Tragic Story of Cheap Food, Cheap Government and Cheap Lives. Simon’s thesis is essentially that the Hamlet fire wasn’t really an accident; circumstances conspired to make it likely, and if it hadn’t happened in Hamlet, it would have happened somewhere else. Among the points he makes: at the time of the fire North Carolina, a state that my imagination sees as resolutely rural, was the most industrialised of the United States. It had become so essentially by gutting control, regulation and inspection in order to attract jobs.

The USDA, responsible for the safety of the food people eat, agreed that a good way to keep out flies would be to lock the doors of the plant. But the North Carolina Occupational Safety and Health Administration had never once inspected the plant.

There’s a whole lot of Bryant Simon’s analysis that just wouldn’t fit comfortably in the episode. One nugget I really want to share here is a brief little scene from the first season of The Wire.

In a minute and a half, David Simon’s characters offer an object lesson in poultry economics, which Bryant Simon uses to explore the real history of the chicken nugget. And the dipping sauces are the key to overcoming chicken fatigue. Genius.

The Imperial Food Products fire wasn't really an accident; circumstances conspired to make it extremely likely If it hadn't happened in Hamlet, it would have happened somewhere else.