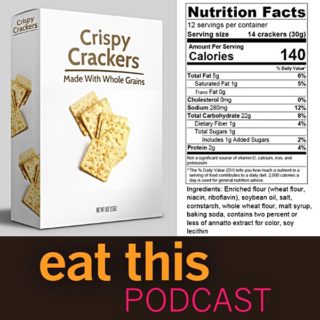 Timely to a fault, this episode comes out a couple of days after “farmers and meat lobbyists accuse plant-based food producers of ‘cultural hijacking’”. That’s in the EU, where this week the European Parliament will vote whether to ban the phrases “veggie burger“ and “veggie sausage,“ among others. Of course the plant-based food producers will have none of it, saying that “claims of consumer confusion are ridiculous”.

Are they, though? Maybe not for meat, but definitely for whole grain foods.

A recently published study showed that in the US consumers are indeed very easily confused by whole grain labels. In part, that’s because as long as you’re not actually lying, you can say things like “made with whole grains” without saying how much. There are industry-agreed labels, but they offer a fair amount of wiggle room too. So it isn’t really surprising that consumers often cannot decide which of two foods is “healthier”.

Look carefully. There’s actually more salt than whole wheat flour in the one made with whole grains.

Parke Wilde, professor of US Food Policy at the Friedman School of Nutrition Science and Policy at Tufts University in Boston, told me about their research. We also talked about labels more generally.

Opponents of the EU proposals would prefer terms like “veggie disc” and “veggie tube”. I’m almost willing to bet real money that will never happen. But then there’s a whole ‘nother level of confusion, on which I do side with the farmers and the meat industry. Whatever you call them, plant-based discs and tubes are often touted as healthier alternatives, but given how much processing goes into their manufacture, and that — just like products “made with whole grains” — they may contain large quantities of things like salt, sugar and fat, are they really healthier than the red meat they might replace?

We know what whole grain means. Whole grain food? Not so much.