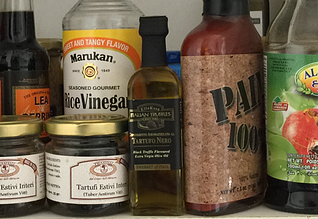 The heat here in Rome has been something the past couple of weeks. Not up to 2003 of blessed memory, but hot nevertheless. The last thing I needed was for the fridge to start playing up, but it did, making horrible noises. Ignoring the disaster foretold, I defrosted the darn thing, which not only solved the problem (temporarily) but also provided inspiration for this episode of Eat This Podcast. At the back of the fridge I found things I had completely forgotten. That prompted me to dig around in the back of the store cupboard too, where there were lots of other things of which I was vaguely aware, but not aware enough actually to have used them. All of which prompted a musing on store-cupboard essentials, gifts from well-meaning friends, and the whole neophilia-neophobia tension. I hope I didn’t ramble on for too long.

Some the things that did not make it into my rambles: