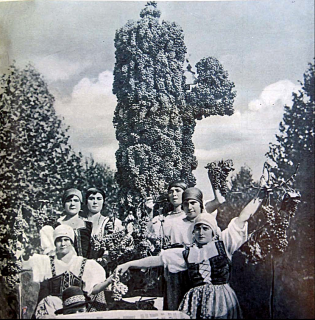 These days, every little town and village in Italy has its sagra or festa, a weekend, or longer, in celebration of a particular local food. Although they have a whiff of tradition about them, most of these are relatively recent inventions, designed to attract tourists as much as honour the food and cement community relationships. I was surprised to learn, then, that in 1930 Mussolini’s Minister of Agriculture, Arturo Marescalchi, proposed a national celebration of the grape – the festa dell’uva – throughout the peninsula. There were many reasons. A glut of table grapes was certainly one, as the government sought to persuade the public to eat Italian. There were also political motives, celebrating Italy as a young nation and strengthening support for the fascists. The result, for a few glorious years, was an annual spectacle of amazing proportions. In Rome, markets were set up for each region to sell its table grapes, there were processions of outlandish grape-themed floats, and a good time seems to have been had by all.

Ruth Lo, a PhD student at Brown University and scholar at the American Academy in Rome has been studying the period and generously agreed to talk to me about her work.