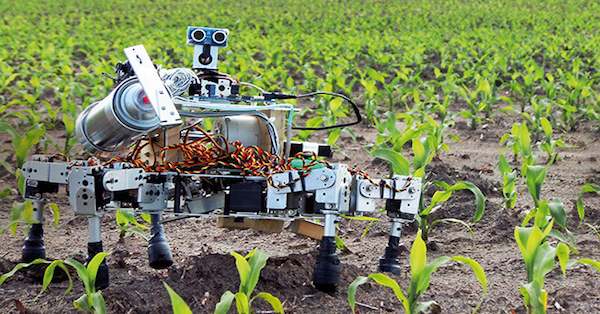 Three chords and the truth

There’s a bit of a roundabout chain to this one. Agricultural Law published Down on the Farm: Nostalgic Ideological Hegemony in the Service of Agribusiness, Big Data, and AI, or, Capitalist Agriculture and Country Music. It’s a fascinating look at several cultural tropes in modern America, most notably two antagonisms; rural vs urban and capital vs labour, triggered by Bayer’s robot farm hands, current code name Prospero, and the company’s imminent takeover of Monsanto. In Bayer’s future:

‘The farmer acts like a shepherd, giving his swarm instructions … Then his robots carry out these orders by communicating with each other through infrared signals.’ [R]obots like Prospero will ‘change the role of a farmer from being a driver to an instructor … [They will] alleviate the physical work of farmers, which gives them more time to focus on the economic part of their business.’

Then follows an unpicking of some iconic country songs that proclaim, loudly and repeatedly, how independent the true American farmer is of all that capitalism.

And, of course, it ain’t necessarily so.

I don’t follow country music religiously, so I had been unaware of Blake Shelton’s Boys ’Round Here, which is a centrepiece of the article, but the Official Music Video is a mini-masterpiece that hinges on that other useful trope, black vs white, for good measure. The song itself is complete tosh, the lyrics banal beyond belief (and don’t just take my word for it) but that’s not the point. The point is the images that it serves up. And the point of the AgLaw article is to question both the images of country music more generally and the deeply suspicious nature of Bayer’s Here’s To The Farmer! campaign. They claim to be fighting hunger across the country. To what extent are Bayer and the other behemoths of industrial agriculture complicit in creating that hunger?

Anyway, that’s what I got out of the AgLaw piece. Then I discovered it was extracted from a much longer piece – Agriculture Wars – by Nick Murray, a former editor at Rolling Stone. And, although I’d never have found it without AgLaw, that’s what I’d suggest you read.

It’s a common enough complaint that you can’t trust any dietary advice from nutritionists because the science is based on small samples and short-term interventions, and in any case, the advice flip flops every few years. Dariush Mozaffarian (at Tufts University) and Nita Forouhi (at the UK’s Medical Research Centre) try to refute that with an article in the British Medical Journal that looks at the history of nutrition science and how the evidence it produces stacks up against other disciplines. Not surprisingly, they decide nutrition science is up to the task, although they also warn that “Management of vested interests is needed to avoid potential bias in research findings and public messaging of dietary advice”. Right.1

Now, let’s make this a theme. Are you getting enough iron? Is it the right kind of iron? What can you do about that? NPR’s The Salt has the answers. You may want to take that with a sip of orange juice. But not a cup of tea. Or a glass of red wine.

Maybe none of that matters. What if The great nutrient collapse has actually happened? I’m truly not competent to judge.

What does country music tell us about agriculture in America today? Not much. Plus some nutritional goodness, and follow-ups to previous podcasts.